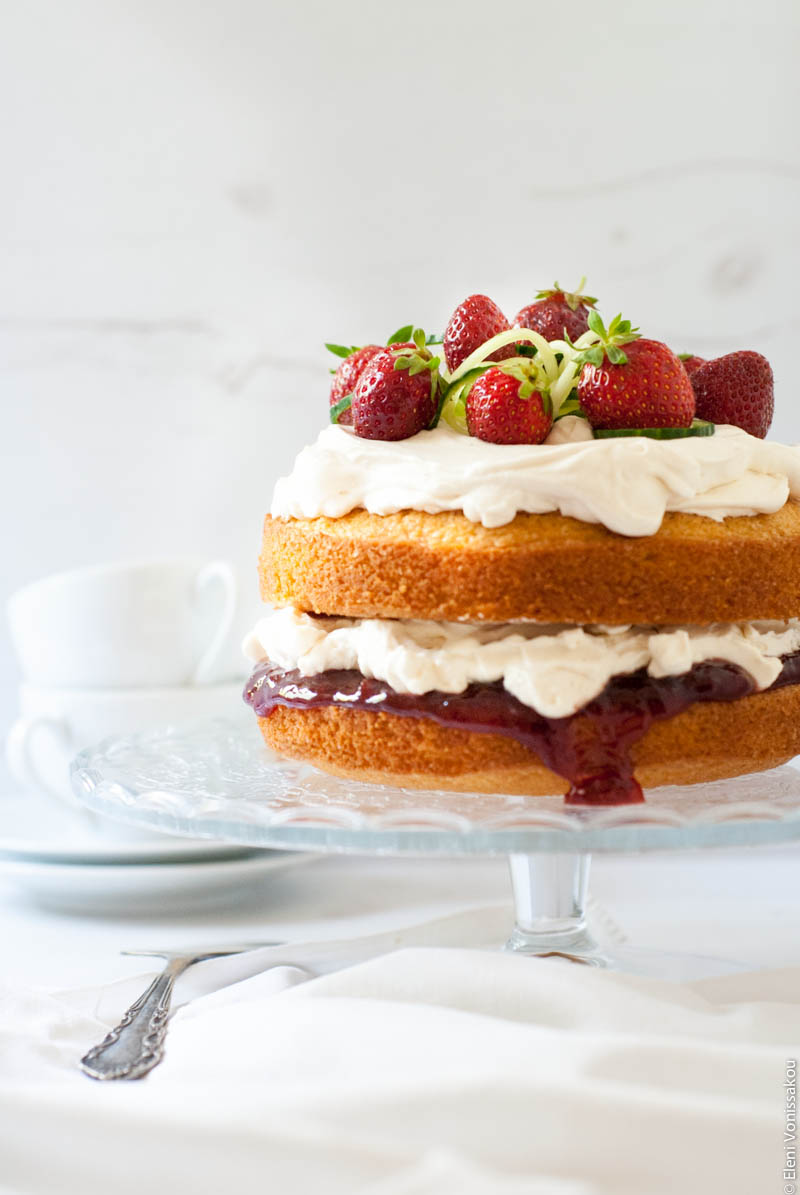 The classic victoria sandwich gets a bit of a revamp, with a splash of Pimm’s No1 to give it a boozy feel, and some mascarpone to add lusciousness to the cream filling and topping. And you won’t believe how easy it is to make.

I can’t get enough of this cake. I have been gazing adoringly at the photo, waiting for a decent enough amount of time to pass, before I can eat another slice. That would be about 10 minutes in my book, just in case you were wondering.

I baked this in honour of the 800th anniversary of Magna Carta, which was celebrated early this week with “high tea” parties all over Britain, cleverly named Liberteas. British Embassies all over the world also took part of course, and I was lucky enough to be invited to the beautiful event hosted by HM Ambassador to Greece, at his Residence. The Residence is an amazingly beautiful neoclassical building in the heart of Athens, with gorgeous gardens. Huge tents had been set up throughout these gardens, to ward off the relentless sun (tea time in Greece in the summer is blazing hot), resulting in an Alice in Wonderland feel. Long tables with cake, scones, strawberries, whipped cream, mini crustless sandwiches with cucumber, cheddar or coronation chicken fillings… And of course a bar or three, with Pimm’s cocktails, earl grey and gin cocktails, hot tea in proper teapots, and lots more. Absolutely lovely.

Apart from this really important anniversary (for more info on Magna Carta see this fantastic animated video), the occasion was also in honour of HM the Queen’s birthday, which is officially celebrated in June every year. Whatever I may believe about the monarchy in general, I have a lot of respect for Queen Elizabeth II. Back in 2012 I was lucky enough to meet her daughter, Anne, Princess Royal, when she came over to take the Olympic Flame back to London. It was then that I realised just how difficult a royal life is. Before you laugh in my face, just think that Anne attends (if I remember my figures correctly) about 900 events a year. And she has to talk to hundreds of people at these things, about all sorts of issues. She also has to seem like she knows what she is talking about (and she certainly does). Very impressive if you ask me. Now think how much more the actual Queen has to do. She must be knackered after 63 years! Do you know that this September, Queen Elizabeth II will become the longest reigning Queen? She will have surpassed her great great grandmother Victoria, who holds this record to date. Yay, another party!

So, in light of all the above, I thought a Victoria Sandwich would be a good choice. Ok, to be correct, the addition of Pimm’s stops it being a true Victoria, and makes it just a sponge. Also, the mascarpone isn’t quite traditional, but it is gorgeous. And I’ve put some on top, when a true Victoria only has a sprinkling of icing sugar on top. But hey, I’m not changing the title so there…

For the icing and filling

You can’t not know what it is. A yummy drink made with gin and spices, best served in a tall glass with lemonade, lots of ice, and delicious garnishes such as strawberries, slices of cucumber, orange, and spearmint. If you really have to, you can replace it with milk in the cake recipe (same amount) and just omit it from the icing recipe.

Beat the softened butter just a bit, add the sugar, beat a tiny bit more, add the eggs and PIMM’s, and again, and finally add the flour with the baking powder. Mix till incorporated. You can just beat all the ingredients together, but this is the way I did it.

Divide the mixture evenly between the two pans and bake for about 20 minutes until golden and until the cake springs back when lightly pressed with your finger. Or try the toothpick method to be sure. Let the cakes cool in the tins for 3-4 minutes, then turn out onto a rack to cool completely.

To assemble the cake, take one sponge and put it on your serving dish upside down (the domed side should face down). Spread the jam over the cake without reaching the sides (it will spread more when the second layer is placed on top). Spread half the icing mixture on the jam, and pop the second sponge on top (right side up). Spread the rest of the icing on top, and garnish with strawberries, cucumbers and anything else you fancy.

Notes: Ingredients must be room temperature! This cake is best eaten very fresh. You can keep it in the fridge if the weather is warm, but bring it out at least half an hour before serving.