Mini bundt cakes or muffins, based on a Greek “Ravani” cake recipe and infused with the fragrance of a Pina Colada. What does that even mean? Little coconut cakes with pineapple, soaked in pineapple syrup. They are gooood. The idea for this recipe didn’t come easily. It didn’t just pop into my head one day like some others do. I had to work at it. Hard. I had to come up with something that met a certain set of criteria. Something that would be used in a sponsored post (over on the Greek side). And it had to be kind of a classic. With a twist. After a couple of failed attempts at another retro dessert, I decided that even if I could get it perfect, it would be a tricky one for anyone to make. I like the fact that my recipes are easy and can be made successfully by beginners, so I changed direction and went back to the drawing board as they say. The combination of coconut and pineapple was already in my head, so I wanted to stick with it. It’s so 80s, I love it. The Pina Colada was the first cocktail I could drink without finding the alcohol too much for my taste-buds, so it occupies a special place in my heart. If you’re trying to do the math, don’t. I didn’t actually start drinking Pina Coladas in the 80s, that came a bit later, but the general feel of this drink just makes me think discos, strobe lights, George Michael on a lilo singing Club Tropicana; you get the picture. So what classic Greek dessert has coconut? The Ravani. Not traditionally; the original -way back when- had only semolina, but over the years people started adding coconut, or even replacing the semolina completely with flour and coconut. The original also had sheep’s yoghurt in it. Most recipes still use yoghurt today (although cow’s), and some use milk.

But what is Ravani anyway? It’s a dense cake, drenched in a sugar-water syrup. Greeks like their syrupy desserts, that I can tell you. And how did I tweak it to give it that Pina Colada effect? I used the syrup from a tin of pineapple! Less work to do, more flavour to give! But I was worried that wouldn’t make it pineappley enough, so I also replaced the milk mentioned above with pineapple juice from a carton. The tweaks I made resulted in some pretty amazing cakes. Am I allowed to say that about my own creation? They were gorgeous. Very fluffy and light. Truth be told, they don’t even need the syrup to be delicious. If you’re looking for something more cakey then leave them without. If you’re looking for something to serve as dessert, then go for the full service. And don’t forget the fried pineapple on the side! Oh and you know what… maybe some ice cream… Oh yes. Can I just squeeze in one last thing? A big thanks to Mrs. D. (my mum) and my friend E. for discussing this recipe with me for waaaaay too long. No one should have to endure that for so many hours. And they didn’t even get to try one. Now that is loyalty.

75ml pineapple juice (from a carton)

For the fried pineapple

5 slices of pineapple (half for each cake)

Take one tablespoon of sugar out of the 180gr and set aside. Beat the rest of the sugar with the 75gr margarine for about 10 minutes in a stand mixer, until fluffy.

Add the yolks to the mixture and continue to beat for about 5 minutes until the colour lightens to a pale yellow.

Whisk the flour, coconut flakes and salt in a bowl.

Add one third of the flour mixture to the egg mixture and beat till incorporated. Beat in half the pineapple juice. Repeat with the same quantities and then add the final third of flour at the end. Beat till smooth.

In a very clean bowl beat the egg whites with the one tablespoon of sugar, using an electric whisk or clean and dry mixer, until stiff peaks form. Gently fold half the meringue into the batter, then repeat with the other half just until incorporated.

Divide the batter between individual, greased, silicone cake moulds. This cake batter is sticky so either grease the moulds to be on the safe side or be very sure of your moulds!

Bake in a preheated oven at 160C fan assisted (180C conventional) for about 25 minutes, or until a toothpick comes out clean from the thickest part of a cake.

Let the cakes cool in the moulds before turning out (very important for silicone moulds). Put them back in the moulds, boil the pineapple syrup for a minute or two, and pour the hot liquid onto the cold cakes. Let them sit for about 15 minutes and then turn the cakes out and place on a rack upside-down for another 15’. This is to make sure the syrup is evenly distributed within the cakes.

Heat some margarine or coconut flavoured spread in a small pan. Fry the pineapple slices for a few minutes on high heat, turning to brown evenly. Let cool.

Serve the cakes with a sprinkling of coconut if desired, half a pineapple slice and a cherry for extra Pina Colada effect!

Notes:
Separating the eggs and beating the white into a meringue is quite important, as it adds to the fluffyness of the cake. Don’t skip it.

Depending on the size of your moulds you might get between 9 and 11 cakes.

The Greek side of this post is sponsored. All opinions are my own. 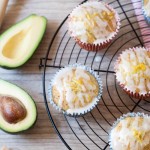