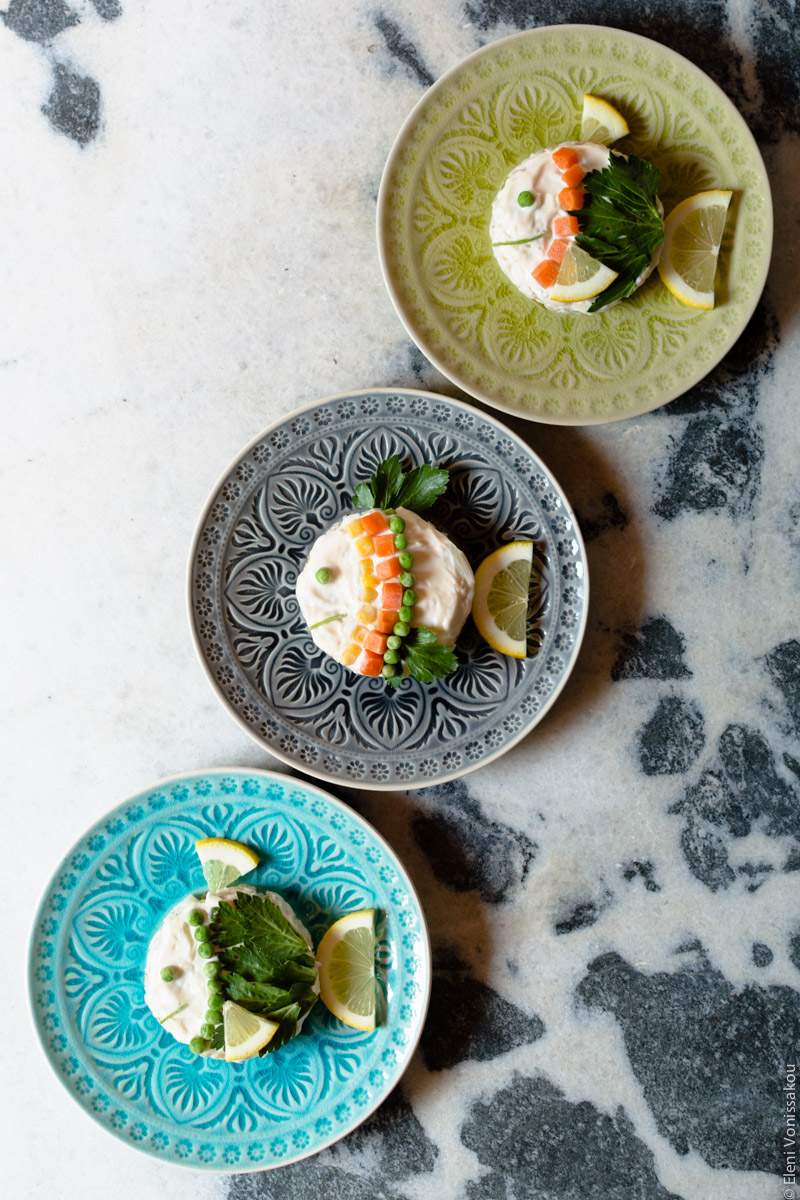 A fish salad with wine poached perch, vegetables boiled in the stock, and lots of mayonnaise. Traditionally styled as a large fish with garnishes, here I’ve opted for little individual fish which are quicker to put together. Ok, if not quicker, then cuter! Going back to the 80s with something a bit retro today. The Greek version of this post is part of a virtual recipe party and since this is quite an interesting dish, I thought I’d share it here as well. “Athinaiki” (meaning Athenian) is a classic that immediately brings to mind the somewhat weird recipes of the 80s in Greece.

During the 80s a lot of new “Western” things finally showed up on supermarket shelves, such as cans of whipped cream, new pasta shapes, self raising flour, jelly (jello) powder and all sorts of ready made, convenience food stuffs. See, in 1981 Greece officially became part of the European Union. So imports flourished and life became more colourful and modern! One thing you can say about this salad is that is can be as colourful as your imagination can stretch to. The décor is a major part of the whole concept, otherwise it could just be another dip or sandwich filling. Back in its time, it was something one would find on a party buffet, so the more elaborate and fancy, the better.

Traditionally, the salad is laid out on a platter, shaped into a fish, and slathered in more mayonnaise. Then all sorts of chopped veggies and leaves are used to make it look pretty. The more hardcore versions use the original fish head and tail! Um, yikes. I don’t shrink away from the sight of a fish head (I am Greek after all) but in this context, I don’t know why, it seems too creepy. Here is a pretty version, where only the tail is used and that is also covered with mayo so it looks nice. Yes, everything looks nice when slathered in mayo. Anyway, I was going to attempt something like that last one, and I was seriously worried about the time it would take to cook and put together. The past month has been super busy and I’d left it till last minute (not by choice this time!). What you are supposed to do is boil veggies and then add a whole, large, fish to the pot and boil that as well, then clean the fish from the bones and mix it with the rest of the ingredients. The fish-cleaning thing alone was going to take ages. So I thought I would do some adapting to this retro recipe, and make it more realistic and suitable for the busy lives of the 00s.

Enter the fish fillet. Yes, we have to make our lives easier where we can. I poached it in water and wine, boiled the veggies in the liquid, and then flaked it nice and quickly with my fingers. I’ve used perch which is nice and meaty and tastes good, and doesn’t have more than a couple of big bones you can easily spot and remove. (Here is one without the mayo layer, so you can see what the salad looks like)

When I first chose this recipe Mrs. D. said she thought they used to have special fish shaped molds for making Athinaiki. She had never made it herself, but she did remember it being popular. That got me thinking first of all, “where the hell am I going to find a mold”, and then, “what else could I use?”. And that is how the cute little round fishies were born. I used a round mold for fried eggs! It’s the perfect size for a portion of Athinaiki as a starter. You’d want more if you were eating it for dinner like I did last night (someone has to eat up all my blog experiments), but this is supposed to be party food. So 4 to 8 portions is what these quantities yield. If you use the fried egg thingy you should get 8 fish.

Use your imagination for the decoration. Anything edible that catches your fancy is fine. Some more ideas I didn’t use here are slices of radish, parsley leaves, capers (they go nicely with the salad) and slices of boiled egg (ditto). Ok if you make these I definitely want to see photos so tag me or use #thefoodiecorner hashtag. Actually this might be a cool activity for children too, getting them to decorate their own fish!

Now if you really really can’t be bothered with decorating, this is still a super sandwich filler or toast topper. So make it anyway! salt and pepper for the fish

1 celery stalk (about 30gr) without the leaves (keep them), thinly sliced

anything else you fancy (like capers, radish slices, boiled egg slices etc)

You know, this would probably be nice with fresh salmon. Straying quite a bit from the original Athinaiki, but it would be really tasty. I might give it a go at some point.

Heat the water and wine in a large deep frying pan. When it comes to the boil add the bay leaf and tarragon. Season the fish fillet and gently slide it into the pan. Turn the heat to medium/low and let it simmer for about 15-20 minutes or until the fish is cooked through (mine took 16’). You may want to start taking out some of the thinner parts around the edge of the fish a bit earlier. If your fillet is thick and isn’t entirely submerged, you should also flip it once while cooking. When ready use a slotted spoon to take out the fish and set it aside.

Turn up the heat and when the liquid comes back to the boil add the potatoes, and two minutes later the carrots and celery. Add half a teaspoon of salt. Cook on medium heat till the veg is tender but holding its shape (about 15-20 minutes depending on how large the cubes are). Strain the contents of the pan using a colander and let the vegetables air dry for a few minutes, flipping them carefully in the colander so there is no liquid left.

While the vegetables are cooking, shred the fish with your fingers and put the pieces in a large bowl together with the pickled cucumbers, the mayonnaise, the lemon juice, the pepper and the one teaspoon of salt. Add the veg and mix gently but thoroughly.

To make the individual fish, use a large round cookie cutter or a fried egg mold. Place it on a small plate, fill it with fish salad and press it down well. Carefully lift the mold and slather extra mayo over the top. Pop a half slice of lemon on one side to look like a tail and use small pieces of vegetables as eyes, gill slits, scales etc.

Serve with crackers, or tortilla chips, or baked pitta bread pieces. I added extra mayo to be honest. But I can eat the stuff with a spoon, so I’ll let you decide if it needs it! Oh by the way, the salad is even nicer the next day.

Here are some more recipes from 80s Greece! In English of course.
Campari & Sanguini (Blood Orange) Jelly by Eat Yourself Greek
Tomato Jelly with Egg by The Healthy Cook (for English scroll down)