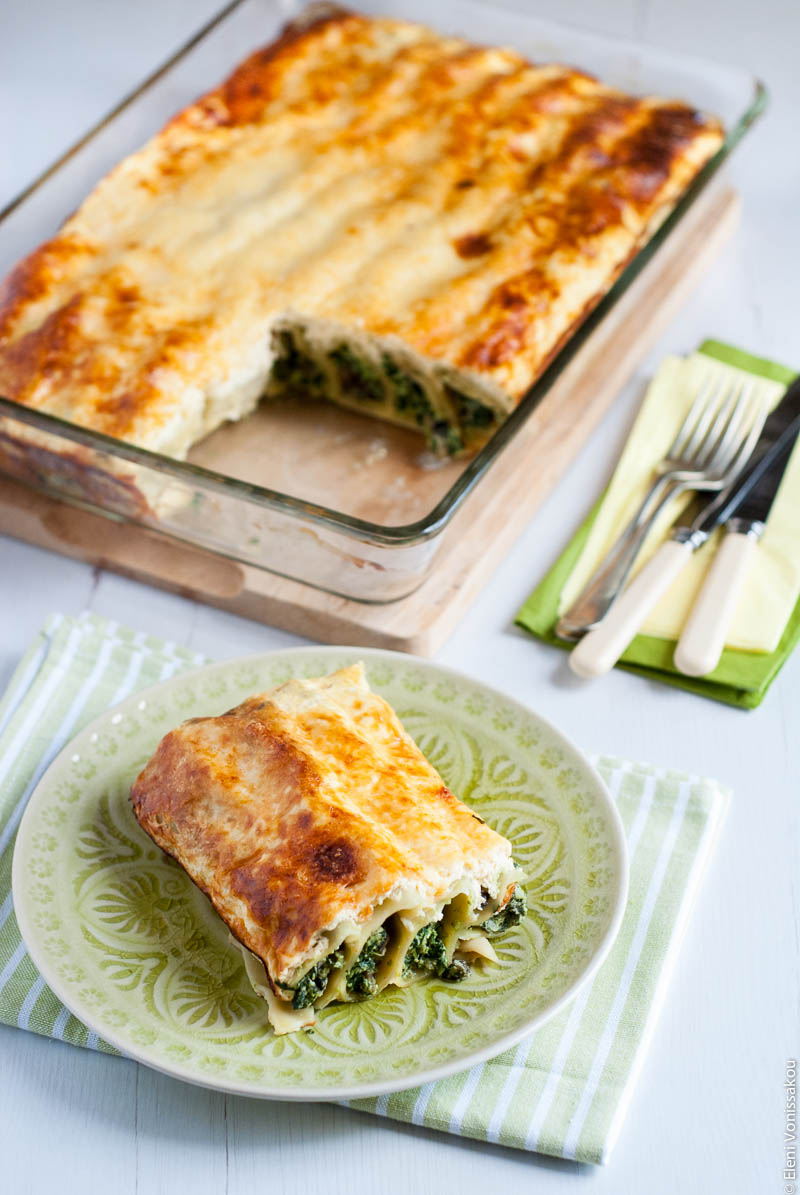 A simplified, easy baked cannelloni dish with a spinach, anthotyro cheese and mushroom filling, and a topping made with Greek yogurt and eggs. If you can't find anthotyro it can be replaced with ricotta, which is a similar soft white cheese.

For a while now I’ve wanted to try cannelloni with a spinach filling rather than the classic meat sauce version. Don’t get me wrong, the classic is a beautiful dish and one of the Mister’s favourites, but I was always sure I would love the spinach version too. As it turns out, it’s way less time consuming to make, especially if you skip the béchamel sauce and go for a Greek yogurt topping instead. I use this topping in many dishes when I want something lighter and quicker, and with less washing up at the end. And I was right. I did love it.

I decided to use fresh spinach without sautéing it first, and left out the sauce that usually goes on the bottom of the baking dish. The idea was that the water released by the spinach during cooking would be used up and absorbed by the pasta. Sure enough it worked, something that saved yet another step in the process, and yet another pan that would otherwise have had to be washed. See? I really did mean it when I said this was a simplified cannelloni recipe. It can easily be made on a weeknight, if you have just a little time to spare for the meditative task of filling the pasta tubes. Great for a meatless Monday dish!

Kefalotyri is a hard, salty, yellow Greek cheese. You can easily substitute with parmesan, grana padano or pecorino cheese.

A soft, fresh white cheese that resembles ricotta. If it’s hard to find use ricotta instead.

Make sure the package says that the tubes do not need pre-boiling.

In a large bowl add the spinach, spring onion, mushroom, kefalotyri, salt and pepper, and crumble the anthotyro over the top. Mix lightly with your hands. Then start squeezing the mixture so that the spinach reduces and it all resembles a filling rather than a salad. When it has reduced in volume and the mixture holds together when squeezed, use it to fill the cannelloni making sure you press it in well. Line up the tubes in a baking dish (mine is 23x33cm) in one layer. If there is any liquid in the bowl pour it over the top.

Preheat your oven to 170C fan (or 180C conventional). In a bowl beat the yogurt, eggs, evaporated milk, salt, pepper and nutmeg. Pour the mixture over the cannelloni making sure you cover them all. Sprinkle the kefalotyri over the top and bake till nicely browned, about 40 minutes.

If you have any filling leftover at the end, stick it in a ramekin or two, break an egg on top and bake alongside your cannelloni for 15 minutes. A yummy snack!